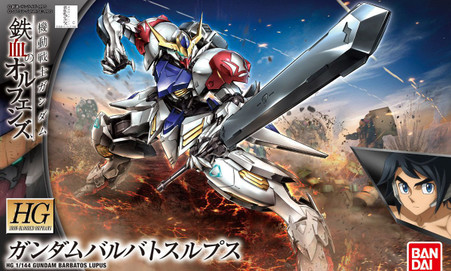 The fastest three-dimensional the Barbados clothed in Shingaiso!

- Reproduce the new form of Barbados, which was redesigned exterior with HG!
- Add wrist, a moveable point there is no such as a conventional part of the armor!
- Comes with each armed and new Mace!

- 02: detail UP in the frame structure adopted!
Simply reproduce the structure of the internal frame is exposed even HG. Frame also pursue the design visible from between the package at the time of moving, look at the time of action is also emphasized.

- 03: Scene reproducibility in the expansion of the action performance UP!
Expanded range of motion around the arm by the shoulder armor parts movable to draw some. Angle of different hand parts are included, it can reproduce the powerful poses in the play.

[Gundam Barbados Alps]
- Gundam Tetsuhanadan that crescent-Augustine uses. Through a number of fights, it became the new figure is renovated by Teiwazu of technology. Each armed have also been strengthened. One machine of Gundam frame that was used for about 300 years ago [misfortune Festival warfare].