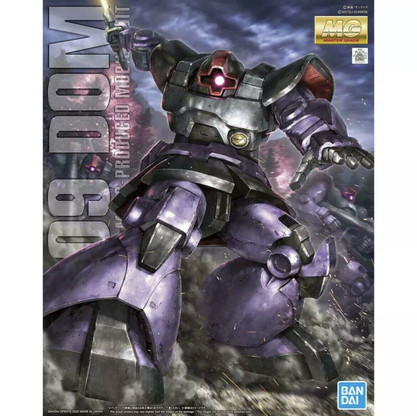 The MG 1/100 DOM, a kit that is still popular to this day despite being first released 22 years ago, has been upgraded with updated molds and parts! In addition to the renewal of the armor details, the joint structures have also been redesigned to achieve ideal proportions and a wide range of articulation. -Both shoulders have swinging mechanisms! The connectors on the shoulders and torso have incorporated forward-swinging mechanisms. This enables it to wield the iconic Giant Bazooka in smooth poses without interference. -The articulation in the legs has been expanded! New movable swinging structures have been adopted for the groin joints. The range of articulation in the legs has also been greatly expanded due to the addition of movable axes in the thigh connectors and to the updated waist side armor parts. -The ankle structures have been renewed! The internal frames for the ankles have been updated, allowing for the recreation of the Dom’s iconic knee-bending poses! -Upgraded Armor New molds have been used to renew the armor on the hip and arms. The arms have especially been improved with a design naturally connecting the shoulders and forearms, while the joint structures in the elbows have been redesigned. -Included Weapons A variety of weapons such as the Giant Bazooka, Raketen Bazooka, and Sturm Fausts are included. Includes: ■ Heat Saber ×1 ■ Giant Bazooka ×1 ■ Raketen Bazooka ×1 ■ Sturm Fausts ×2 ■ 90mm Machine Gun ×1 ■ Water decals ×1