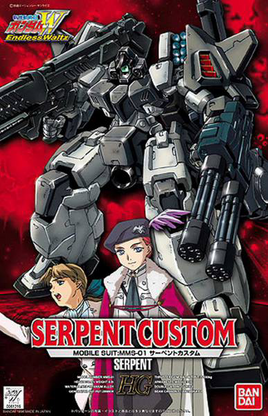 Large-scale version of the mecha from the OVA (Original Video Animation) series "Gundam Wing: Endless Waltz." Chest and shoulder hatches open. This kit is loaded to the gills with weapons, including two double-barreled gattling guns, a beam cannon and a massive bazooka weapon, too, nearly all of which can be mounted on its back when not in use. Comes with small-scale, unpainted figures (about 7.5cm high) of Mariemaia and Relena Darlian. Snap-assembly, fully-posable and molded in color.