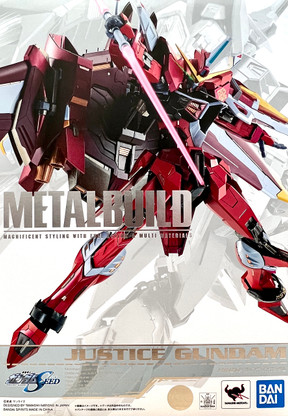 From Mobile Suit Gundam SEED comes a figure of the Justice Gundam as part of the Metal Build line! Including a range of weapons such as a Beam Rifle, Beam Saber, Shield, and effect parts, the Metal Build Justice Gundam's most striking accessory is the Fatum-00, designed to mimic a silhouette reminiscent of a knight's cloak.

Highly poseable and expertly recreated under the supervision of Mr. Satoshi Shigeta, the chief animation director of Gundam SEED, you will want to be sure to add this Metal Build Justice Gundam to your collection!