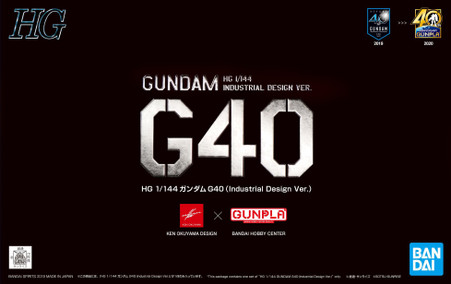 A special Gundam design jointly produced by designer of the Enzo Ferrari, Ken Okuyama, and "Gundam Thunderbolt" film director Koh Matsuo to celebrate the 40th Anniversary of Gundam and upcoming 40th Anniversary of Gunpla! The G40 Industrial Design version of the RX-78-2 sets out to recreate the dynamic human-like twist, turns, and stretching movements performed by the original Gundam 40 years ago. Adopting the same process used in developing industrial products, an entirely new concept of joint structure has been created to accommodate this vision of human movement that features high torsion in the body and limbs. A high emphasis on the overall silhouette even through movement has led to the creation of a design that makes you feel the future! Includes 2 beam sabers, rifle, and shield.