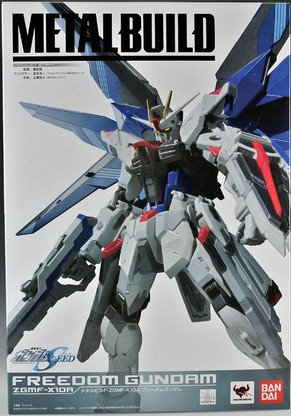 The birth of the Metal Build series, which began with 00 Gundam Seven Sword in March 2011 was nothing less than a game changer for high-end robot action figures. A year after the initial release, Metal Build will continue with the Freedom Gundam from the Gundam SEED series. Employing diecast, capable of awesome action poses, and exhibiting superior articulation and breathtaking detail; this represents the pinnacle of robot action figure precision and technology and what will have been a year-long endeavor of one of the greatest design teams ever assembled- overseen by Gundam SEED animator Satoshi Shigeta, and fine-tuned by sculptor Yoichi Sakamoto. Figure set will include interchangeable hand parts, shield, beam rifle, special display stand, and special booklet.