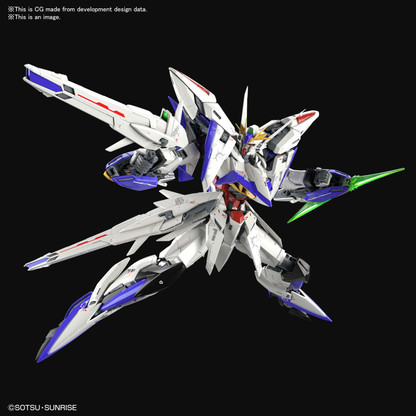 Celebrating the 20th anniversary of Gundam SEED is this transformable Gundam from the new SEED MSV project!   A customized M1 Astray utilizing technology “borrowed” from the Freedom that Kira had been using, this Ecripse Gundam  was officially mass produced as the Murasame in “Gundam SEED Destiniy” and combines the tech of the Earth, Orb, and ZAFT forces allowing its body to be able use the Striker, Silhouette, and Wizard packs.  Following the lore, this model kit utilizes portions from the MG Freedom 2.0 including its tri-color motif. Includes rifle that can be changed to a sword form as well as beam shield with effect parts.