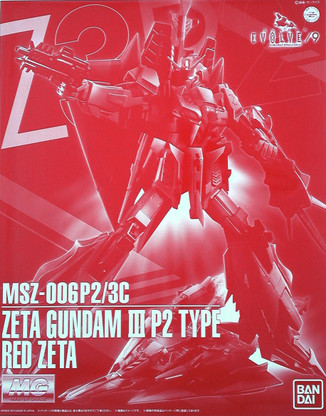 Red Zeta, the first time to appear as a 3D model Gunpla!   ---------- ＭＳＺ-００６Ｐ２/３Ｃ Zeta Gundam III P2 Type Red Zeta ---------- [A New Type customized MS based on Z Gundam-3 Type C] This is a New Type customized MS which is specially improved, based on Z Gundam-3 Type C. Installed with a system known as “Psycho Neutralizer,” which reflects the pilot’s senses to the MS’s movements. And fins equipped on different parts of the MS that performed as sensors by collecting external information. Instead of Johnny as the original pilot, Yuri Azissa (Red Snake), who has the New Type power, takes over the control. ----------   From OVA “GUNDAM EVOLVE../9,” MSZ-006-P2/3C Zeta Gundam III P2 Type Red Zeta is released as a 3D model Gunpla for the first time! The characteristic form of the main body and the special weapons are reproduced with new molding, and also allowed for the transformation of wave rider!!

**BOX MAY BE CREASED AND DENTED**