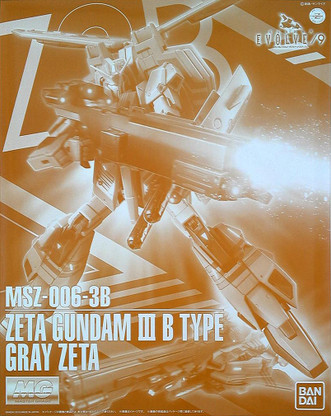 Gray Zeta, the first time to appear as a 3D model Gunpla! ---------- ＭＳＺ-００６-３Ｂ Zeta Gundam III B Type Gray Zeta ---------- [The improved version of Zeta Gundam with enhanced firepower]  Based on the Z Gundam-3, this MS is focused on enhancing the firepower. As weight gained due to the additional weapons, auxiliary thrusters for both legs  together with large tail stabilizer that stretched on both sides are added to improve the motor performance. Although the MS piloted by Gray Wolf is commonly called “Gray Zeta,” the body color actually is yellow due to the beam deflector coating applied on the entire surface of the body. ----------   From OVA “GUNDAM EVOLVE../9,” MSZ-006-3B Zeta Gundam III B Type Gray Zeta is released as a 3D model Gunpla for the first time! The form of the main body and the special weapons are reproduced with new molding, and also allowed for the transformation of wave rider!!

**BOX MAY BE CREASED AND DENTED**